Chemical From Poles Now at Issue 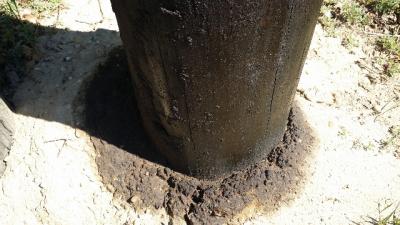 Lawyers building a case against PSEG Long Island, the company that has angered some residents with its aboveground installation of a high-voltage electricity transmission line from East Hampton Village to Amagansett, will meet Saturday with residents along the route, potential plaintiffs who could claim that the project has damaged their property values and poses a danger to their health.

A report this week by environmental consultants hired by the group organizing the legal action, Long Island Businesses for Responsible Energy, indicates high levels of a toxic wood preservative chemical found in soil around the new utility poles, and recommended that steps be taken to test nearby groundwater and protect the public from contact with the chemical.

A review of the project by the state’s Public Service Commission is under way, at East Hampton Town’s request, with portions expected to be completed by Wednesday, according to a recent letter to the town from Audrey Zibelman, the commission’s chief executive officer, who visited East Hampton early this month.

Ms. Zibelman said in an April 15 letter to Supervisor Larry Cantwell that the agency would review the need for the new transmission line for continued reliable energy service, as PSEG has asserted. The department will also evaluate the costs that would be associated with burying the line, as critics have called for, and analyze whether local alternative energy generation projects could meet additional energy needs. PSEG Long Island will be asked, Ms. Zibelman said, to share with the town its overall plans for energy service over the next years.

In the face of complaints about the initiation of the transmission line project here, which took many by surprise, the state officials will, Ms. Zibelman said, review the public outreach process followed by PSEG — seeking, according to her letter, “to ensure communities remain informed about changes PSEG-LI is considering, while also including a thorough analysis designed to meet reliability needs, such as energy efficiency, demand response, and renewable energy options that will help reduce the impact on the local environment.”

The agency is conducting a similar review of a PSEG Long Island project in Port Washington, where community protests are also taking place.

In a response to Ms. Zibelman, State Assemblyman Fred W. Thiele Jr. said that while the commission’s review is welcomed, “at this point, the bottom line for the community is how to remove the overhead transmission line, and how to equitably pay for its burial if it is necessary for reliability.”

“PSEG-LI has withdrawn from public discussions,” Mr. Thiele said. The utility has indicated a willingness to discuss burying the line, but only if local ratepayers shoulder the entire cost of the transmission line upgrade. A cost-sharing scenario similar to one employedseveral years ago in Southampton Town was rejected.

Taxpayers on the East End, the assemblyman told Ms. Zibelman in a letter, voted to support the community preservation fund tax in order to preserve scenic vistas, and “the placement of 60-to-70-foot transmission lines and utility poles through historic villages and scenic farms and open spaces by PSEG-LI and LIPA diminishes the value of this public investment by the town in excess of the cost of undergrounding a transmission line.”

Early this week a second judge denied PSEG Long Island’s request for a temporary restraining order overturning an order by the town stopping work on the utility’s Amagansett substation. The town asserts that the project, which has included extensive clearing and the construction of a building and chain-link fence, required town permits. PSEG has argued that it is exempt from that requirement. The company is seeking to appeal the ruling on the restraining order and pursuing a request to the court for a preliminary injunction to prevent the town from interfering in the utility project.

Long Island Businesses for Responsible Energy, which has called for the wires stretching between PSEG’s substations on Buell Lane in East Hampton and Old Stone Highway in Amagansett to be buried away from residential neighborhoods, and for the wider and taller utility poles installed to carry them to be removed, hired Dermody Consulting, an environmental consulting firm, to inspect the new utility poles and test soil samples taken from the area adjacent to three of them — two on Town Lane, including one at the intersection of Windmill Lane and Town Lane in Amagansett, and one on Gingerbread Lane in East Hampton Village.

In a report, the consultants say that the poles have been treated with pentachlorophenol, a wood preservative known as penta, which the federal Environmental Protection Agency calls “extremely toxic to humans from acute (short-term) ingestion and inhalation exposure.”

The consultants, the report says, inspected recently installed utility poles on April 10 and noted a “dark amber color, apparently due to their recent treatment of penta,” and a “significant chemical odor” from at least 15 feet away from at least one of the poles. At some poles, according to the report, there was “dark, stained soil” within mounded soil around the pole, or a “ ‘halo’ of wet, chemical-saturated soil” within a four-inch area extending from the pole.

The consultants surmised that liquid containing penta “may have been poured onto the soil to percolate into the underlying soil, adjacent to the subsurface portion of the poles.”

Soil samples were taken about six inches away from each of the three targeted poles on April 11, from a shallow area as well as a deeper hole 12 to 18 inches below grade, and tested in a New York State Health Department-approved lab.

The results indicate that significantly elevated concentrations of penta were detected in the soil at both shallow and deep locations at two of the three poles; none was detected at the other.

The consultants note in their report that penta, which the E.P.A. banned for public use in the United States in 1987, has been banned in 26 countries. Its use in this country is restricted to wood preservation on utility poles and railroad ties.

The Dermody report concluded that “the presence of penta on the poles and in the soil in the vicinity of the poles appears to represent a significant risk to human health and the environment.”

“At the poles where penta is present, there is also a high potential for the penta to leach downward through the soil and contaminate the groundwater,” the report says.

The consultants recommend removal of the chemical-saturated soil around the poles as soon as possible, and that residences in the area with private wells, where groundwater is downgradient of the poles, have their water tested frequently and consider drinking bottled water. 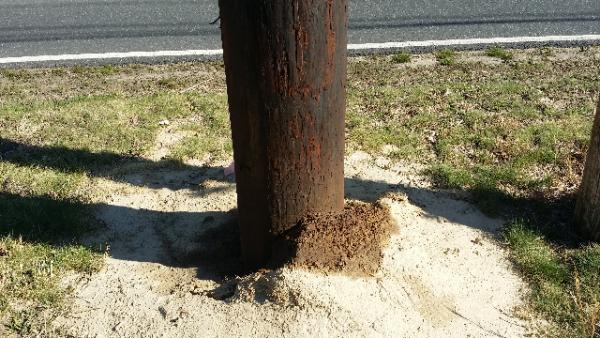 A pole on Cedar StreetLong Island Businesses for Responsible Energy

In addition, they suggest installing safety fencing around the poles to prevent contact with them, and the posting of notices warning that the poles and the soil around them should be avoided.

The consultants also suggest issuing the report to an attorney who can determine if the release of penta to the soil should be reported to the State Department of Environmental Conservation.

Mr. Cantwell said Tuesday that the town had received a copy of the report, and that he had referred it to town attorneys and the Natural Resources Department for review.

The meeting on Saturday for potential plaintiffs who live along the six-mile route of the new transmission line will take place at Town Hall from 1 to 4 p.m. The business group has hired two lawyers, Irving Like and Leon Friedman, to represent plaintiffs in a lawsuit centered on the impact of the high-voltage line on property values, aesthetics, or environmental and personal health and safety.

Contributions to help with the legal fight have been requested and can be sent to L.I.B.F.R.E., c/o Helene Forst, 176 Newtown Lane, East Hampton 11937.