Coalition Working for the Environment

As Election Day approaches, the East Hampton Environmental Coalition is working toward two goals: Making sure candidates in local races do not forget about environmental causes, and making sure the general public knows which way they stand. 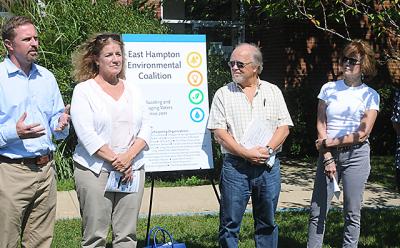 The environmental coalition, made up of, at last count, 17 organizations that come together every other year around this time, announced a three-pronged plan of action on Friday. It will distribute its “East Hampton Green Guide,” summarizing its members’ concerns and detailing their policy goals, to the candidates, and will publish in full their unedited responses to a questionnaire on environmental issues. On Saturday, it will sponsor a question-and-answer forum with the candidates at the Amagansett Library from 2 to 4 p.m. Candidates running on the Democratic slate will make their case in the first hour; the second hour will be for the Republicans.

The coalition’s member groups include the Quiet Skies Coalition, which campaigns against aircraft noise; the Dark Sky Society, which addresses light pollution; Defend H20, which wants to improve water quality; the Concerned Citizens of Montauk, Long Island Businesses for Responsible Energy, and more. Jim Matthews, the head of the Northwest Alliance and co-chair of the environmental coalition with Jeremy Samuelson, estimates that it has 6,000 members in all.

“What they share in common is a tremendous commitment to the East End environment,” Mr. Matthews said. “As we all commonly know and believe and cherish, the East End is certainly one of the most preserved and marvelous environments that we could possibly hope to live in. It has become the obligation of those who live here to do everything we can to protect it.”

He praised “the sensitive leadership” of East Hampton town and village, saying that, over the years, wisdom has largely prevailed here when it has come to environmental issues.

“Of that we are very proud; on the other hand we are also very defensive,” Mr. Matthews said. “Each year that there is an election, we gather to do what we can to be sure that everyone remembers that the environment is what makes this place great. We want to keep the candidates and the electorate, in particular, very much aware of the issues that concern all of these groups.”