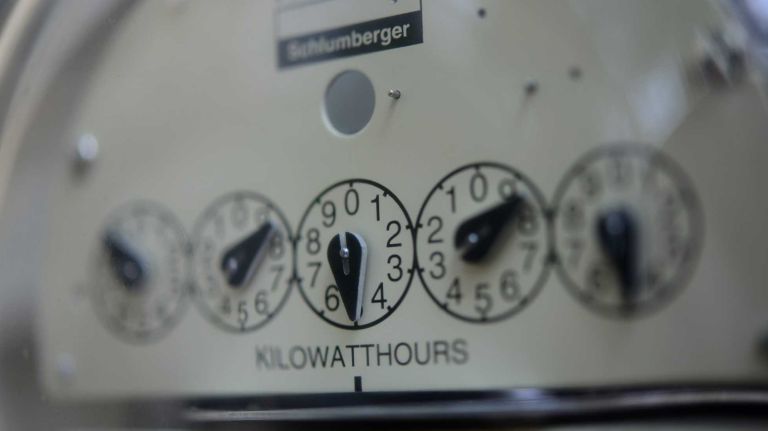 Detail photo of an old electric meter on a house in Suffolk on the afternoon of August 4, 2014. Photo Credit: Newsday / Thomas A. Ferrara

It’s not just electric rates that will change if a three-year rate plan proposed by LIPA and PSEG Long Island is approved by LIPA’s board by year’s end.

A proposed update of the Long Island Power Authority’s official rule book gives operator PSEG the ability to increase rates beyond a proposed 3.9 percent rate hike to pay for certain debt, power and storm costs, to charge more for utility-pole attachments and fines, and to have more leverage in altering future bills.

Public hearings on the new rates and other rule changes start Monday in Riverhead.

A Newsday review of the 421-page document, known as the LIPA tariff, shows dozens of minor and some major changes, including dropping all references to the name “LIPA” in favor of “the authority.” The new rules expand the categories for which the utility can “periodically” adjust bills or rates, beyond the proposed delivery charge increase of between 3.8 percent and 3.9 percent over the next three years.

In addition to the currently allowable adjustments for fuel and power costs, efficiency and renewables, and taxes, the new rules would allow PSEG-LIPA to make “periodic” changes through a new “Delivery Service Adjustment” category.

Included in that adjustment are costs tied to LIPA’s $5 billion power-supply agreement with National Grid, funding for a storm-reserve fund and certain debt-service costs. The tariff doesn’t list a specific limit on the amount the charges could change.

“My concern is that the adjustment could function as a blank check to make the rate even higher” than 3.9 percent, LIPA trustee Matthew Cordaro said. “It makes the rate almost academic.”

PSEG called the delivery service adjustment a “cost tracker for three costs that are out of the control of the utility.”

Another new factor that could affect rates — up or down — is a mechanism called revenue decoupling. The mechanism, approved by LIPA trustees last year, lets LIPA recoup its costs when green-energy measures and cooler weather result in lost sales.

Like the old rules, the new tariff states that any complaint about bills, deposits and service problems should first be brought to the utility, in this case PSEG. If PSEG doesn’t resolve the problem to customers’ satisfaction, they can file a complaint with the state Department of Public Service. But under the new rules, the appeals process for DPS decisions would move to the “Office of Secretary” at the department’s Albany office, rather than LIPA’s president and chief executive, to whom customers currently file appeals.

The DPS office on Long Island also will review the LIPA rate proposal and make recommendations on any proposed changes, but ultimate approval rests with the LIPA board.

PSEG said the proposed revision “was made at the request of the New York State Department of Public Service.”

The new rule book eliminates numerous classes of special rate codes, some grandfathered in from the days when the Long Island Lighting Co. ran the utility. Some offered seasonal discounts on power for certain classes of customers. PSEG said it proposed eliminating the codes to “clean up the billing system.”

Cable and communication companies that want to attach equipment to LIPA utility poles will see the fee increased to $11.98 per pole per year from a current $9.68. PSEG said the change “moves the penalty to the second lowest in New York State.”

For items such as flags or other “patriotic, civic or ceremonial” attachment, the fee jumps to $6.19 per pole per year from a current $5. LIPA can waive the fee at its discretion.

PSEG is increasing the fee for when it is unable to gain access to a nonresidential customer’s meter to $100 per month, compared with the current $50. PSEG said the change is in line with the state’s “authorized amount.”

Customers who connect to electric service without the utilities’ authorization would be billed a $160 removal charge under the new rules. LIPA previously has not had such a penalty.

The new rules would allow the utility to provide just a single reconciliation of a customer’s balanced billing account per year. Currently, that comparison of the monthly bill against the year-to-date accrued balance is done every other month.

PSEG spokesman Jeff Weir said the utility proposed the change to “simplify the language to reflect what other utilities are doing,” and said there is no plan to discontinue the bimonthly comparisons “at this point in time.”

Starting in January, the daily-service charge that LIPA-PSEG apply to all customers simply to be connected to the grid for most residential rate codes would jump to 5 cents a day from a current 3.6 cents per day. The cost increases incrementally over the three-year rate plan, jumping from a current $10.80 a month to $20.

Certain business customers also would see increases in that daily service charge, some doubling from a current $1.40 a day to $2.80 starting in 2016. Daily charges also are going up for traffic signals and certain outdoor lighting applications.