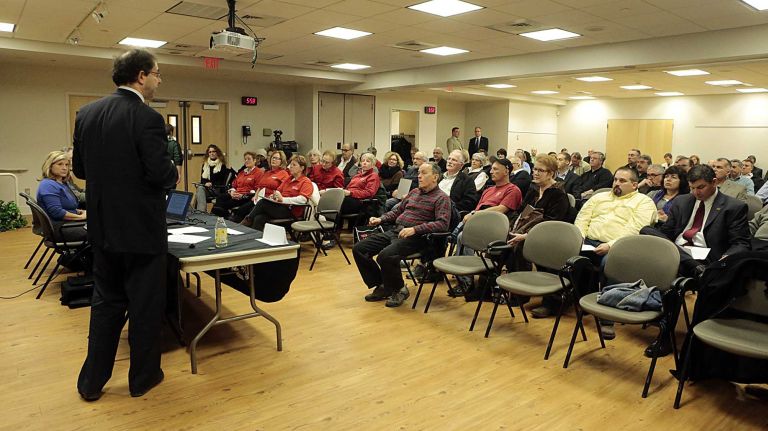 Attorney for PSEG Matt Weissman explains his company’s rate plan to the audience at the Riverhead LIbrary on Monday, March 2, 2015 in Riverhead. PSE&G and the State Department of Public Service present a case for a 4% LIPA rate increase. Photo Credit: Joseph D. Sullivan

LIPA sought public comments Wednesday on a rule change that would let PSEG Long Island charge customers to recoup costs when sales are impacted by unexpected weather, green-energy adoption or the economy.

The mechanism, called revenue decoupling, also would credit customers if sales come in above projections.

Sales have been below projections in seven of the last 11 years; that would have prompted customer charges in the following year of an average of $13 million. Overcollections took place in four years.

The proposed change lists no upper or lower limit for the amount customers could pay or be credited.

Decoupling was designed by regulators to motivate utilities to use power-saving green-energy sources even if they hurt sales. It lets electric companies recover fixed costs even when sales are hurt by unexpectedly cooler weather, lower usage due to renewables and efficiency measures and economic downturns.

In the past, LIPA retained the amounts it overcollected when sales came in higher than projected, and “absorbed” the impact of lower sales.

At a Hauppauge hearing about a proposed 4 percent rate hike, Little said the measure, which would appear as a charge or a credit in following year’s bills, would bring “long-term stability” at LIPA and ultimately benefit ratepayers.